IN THE SPRING OF 2013 I INVITED MY FRIEND, AND MENTOR DR JEREMY MORTON TO COME TO BIHARAMULO HOSPITAL IN TANZANIA TO SPEND A FEW WEEKS WORKING, OPERATING, TEACHING AND LEARNING AT THE HOSPITAL. HERE ARE TWO ENTRIES FROM HIS JOURNAL WITH HIS OBSERVATIONS:

1)MORNING ROUNDS: The first day we made rounds on the men's ward with the nurse, a nun who was a doctor, two medical students and a clinical officer. We walked down the dark hallway, in need of lighting and entered the first room. This was called Ward I because it contained 9 beds, four on each wall and one in the center. Each bed contained one very sick patient, fully dressed in their own clothes, and two or three members of the patient's family. We had to squeeze between the beds to get at the individual patients, displacing the family members briefly. The family members are very important, for they provide the food and actually do the feeding and personal care for the patients. The hospital and nuns provide food only for the neediest and homeless patients.  When we stopped to see a patient with pneumonia, we wrote out a prescription for an antibiotic and gave it to the family, who then went to a pharmacy outside the hospital gates, bought the medicine and brought it back for the nurse to give to the patient.
The first patient we saw was fairly young and was sitting up in bed, gasping for breath and virtually drowning in his secretions. He had end-stage pneumonia, which had not responded to an antibiotic and needed an endotracheal tube, suctioning and a ventilator and be transferred to an intensive care unit, none of which were available here. The only oxygen we could get for him was an oxygen concentrator machine which was eventually set up without much benefit. Unfortunately, he died shortly after noon. A bad start and a rather abrupt introduction into a very different level of care than the one I am accustomed to. The next patient was an old man with fever, cough and shortness of breath.  His chest X-ray showed complete white out of the upper half of his right lung, probably representing advanced TB, or possibly lung cancer. The third patient was a teen-aged boy who was immunocompromised from AIDS and had gastroenteritis.  His AIDS was being treated thanks to PEPFAR, the program started by George Bush, and he went home the next day. Next was a 10-year-old with severe malaria (fever, headache, anemia, confusion, dehydration).  We started him on IV quinine and transferred him to the pediatric ward. In the bed next to him, about 12 inches away, was a middle-aged man with cough, fever, dyspnea and delirium, who had obvious tuberculous pneumonia on his X-ray.  We moved him to the TB ward for isolation. Next in line was a 15-year old, who looked 10, with juvenile diabetes which was out of control, and severe malnutrition with dehydration and mental obtundation.  His family was too poor to pay for insulin.  This was exactly what happened to children with this disease prior to the discovery of insulin in 1922. The next patient we saw had a fractured femur from a motorcycle accident. He had been treated with a plaster splint on his lower leg, fused with a cylinder cast enclosing about three quarters of his thigh.  Since his hip and pelvis were not immobilized, the proximal portion of his femur was free to move relative to the distal half.  He needed a period of traction to reduce the overlapping bone ends, then a giant spica cast, made like a pair of pants, with the top at the level of the stomach, one leg extending all the way down the affected leg and including the foot, and the other leg down to just above the knee.  Obviously, if this could even be done here, which it cannot, it would never work in rural Africa.  The only reasonable solution was to ship him off to a much bigger hospital in Mwanza where an orthopedic surgeon could operate on him and put a steel rod in the femur so he could walk on it with crutches within a few days. Fortunately, he worked for the government so he had access to this care.  Then we moved on to the next room.

2)SURGICAL CHALLENGE:  There are a lot of instruments that are not available in the operating room here, but one instrument that is always present and often used is the Fly Swatter.  One or more flies nearly always show up at the beginning of the operation, often before the surgeon, immediately after the sterile instruments are uncovered, and the circulating nurse takes off frantically with the Swatter to clear the area before the procedure begins.  Yesterday was an eventful day.  We were watching an old man who was chronically ill with a 20 kilos weight loss and recent severe abdominal pain.  We were conflicted about whether or not to operate on him and look inside his abdomen, because he didn't have all the typical signs indicating that there was something we could fix, and we were reluctant to subject this frail guy to the big surgery unnecessarily.  We put him on a trial of antibiotics overnight.  That night I lay awake for hours thinking about that patient.  I realized that deep down I had been thinking all along that we should operate on that patient, but that my fear of getting into a difficult situation in this limited and unfamiliar environment dissuaded me from acting on my best judgment and I acquiesced to watching overnight.  I felt particularly guilty because I thought that Larry was, in a way, relying on my seasoned judgement to help him make tough surgical decisions just like this one, and I had essentially chickened out.  When we arrived in the morning, we found that he had died during the night, and this came as no surprise to me and confirmed my fears from the night before.  The nurses and MO mentioned it and expressed no real surprise, but Larry felt very badly and I felt even worse.  We consoled ourselves by reasoning that the patient probably had an advanced malignancy and it is unlikely we would have been able to help him, but we didn't know that.
A short time later, we saw a young man with severe increasing abdominal pain after being hit in the stomach by someone's knee during a football (soccer) game the evening before.  After examining him, I was pretty convinced that he had a hole in the small intestine, caused by a loop of bowel getting squished up against the back bone; a rare injury but one I had seen before a long time ago and actually written a paper about when I was a resident.  We opened him up and were happy to find that this this was indeed what he had and we got him fixed up.  So that cheered us up and I felt at least partially redeemed.  I helped Larry do the case, and it was a great way to wrap up my time with him here at the Biharamulo Hospital.  That may turn out to be my last really productive medical day, as today Friday is a holiday, then the weekend, then we head off to Mwanza to see the Serengeti, then home. 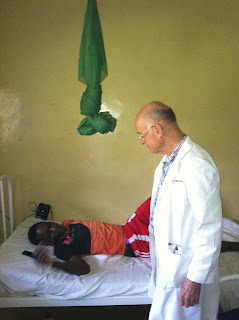 Posted by Laoneflatworld at 2:41 AM